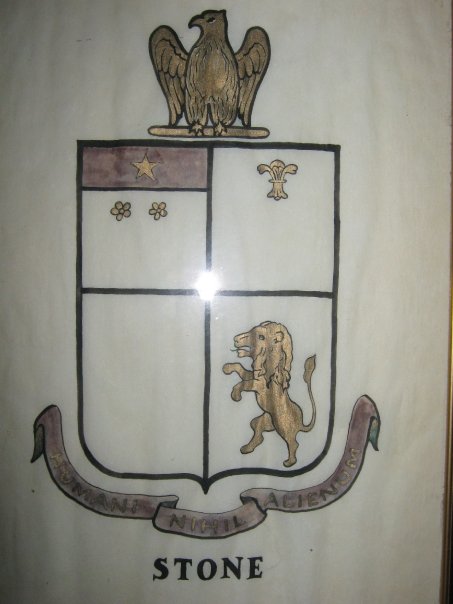 This fall ABC’s Once Upon a Time airs for a fourth season along with NBC’s fourth season of Grimm. The captivating power of fairy tales remains strong two hundred and two years after the publication of Jacob and Wilhelm Grimm’s collection of folktales commonly known in English as Grimm’s Fairy Tales. The book’s German title Kinder- und Hausmärchen, translates to Children’s and Household Tales. I haven’t become a fan of these television shows yet, but I remain an avid fan of household tales.

Household tales are the stories passed down from generation to generation within a family. You might consider them microcosmic folktales. Household tales typically don’t have the broad appeal of folktales, but for their family of origin, these stories are powerful. As a family’s myths, household tales often explain the origins of a family practices.

I grew up in my family’s old farmhouse in Waverly, Pennsylvania built in 1876. Stately for a farmhouse, the two-story home had a formal front staircase and a parlor, but the backstairs were never used. I don’t think I knew the stairs even existed until I was in the third grade. I had always thought the first floor entrance was merely a closet. The door that covered the entrance stood behind my grandmother’s padded rocking chair in her office. Most of my Grandmother’s space was forbidden.

My parents, my t

hree siblings, and I lived upstairs in my grandparents’ house. We always used the front stairs. The backstairs connected to our bathroom and to a storage room. The storage room was called Grandmother’s room. It had indeed been hers at some point, but she never used it during my lifetime. She slept downstairs and never came upstairs. She occasionally came into the hall and whistled to gain our attention. We would then come to her. She never came up to us.

At some point, I had tried to peek into my Grandmother’s room upstairs, but slammed the door shut when I was met with the haunting stare of a stuffed grouse that I can only imagine was positioned in the door to ward off unwanted visitors like myself.

The door off the bathroom to the backstairs was never referred to as the door to the backstairs; rather, it was the back hall. I was sent periodically to the back hall to fetch a jar of home-canned tomatoes, green beans, or sauerkraut. They were stored in a tall cabinet. Until I had grown tall enough to see over the cabinet and could begin to see there was a large dark space behind the cabinet in the back hall, I had never wondered what was there.

I can remember peering over the top of the cabinet for the first time and seeing the steep, dust-covered stairs. The bottom was lost in shadow, like the bottom of a well.

As I remember it, my siblings and I all shared the same story as to why the stairs were closed off. My great-grandmother, who I had never known, had fallen down the stairs. Considered then a hazard, they had been blocked off, remaining unused for decades.

When I told my father this tale when I was in my twenties, searching for a fuller version of the story of why the stairs had been blocked, he told me the story was bunk, but he didn’t have any other story to replace it.

My omnipresent grandmother reigned larger than life in our home, even though she was strikingly short. She watched us constantly, enforcing numerous rules, such as a rule against tree-climbing. When I asked my mother why my grandmother was so protective, she reminded me that my father’s sister had drowned when she was two-and-a-quarter. The household tale of my Aunt Margaret became the following poem:

I touched the concrete
beneath the dirt, beneath
the yew above the stone
that marks the spot without
words.

I knew I was there.

I’ve held her baby shoes,
barely emptied by age.
I’ve seen a few of her dresses
ivoried in a bureau safe.

I’ve even felt the leather
of the fatal football helmet,
but I’ve never heard the story
told by anyone who was there.

My mother says the maid lost
track of Margaret as she played,
and later found her face
down in the lily pond below
the house. They think she

must have slipped, strapped
playfully in the safety
of my father’s leather helmet,
staring at some fish. She couldn’t

have floated like Ophelia,
angelic face up, surrounded by
free flowing hair and a white dress
billowing like a cloud.

The carp must have been confused
seeing the open face of a flower
under a padded head.

This fall before I get enchanted with a new season of television, I think I’ll entertain my children by retelling some more of my family’s household tales. I would enjoy sharing with them household tales from other families. Take time to share one of your family’s stories in a comment below.