A block print I made for Christmas about a decade ago. 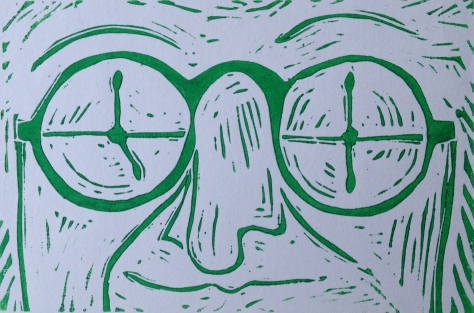 On Seeing the Cost of Time Change

Old Ben saw too many francs

burning up in France’s candle wax.

He trusted his vision.

He trusted his watch.

I am convinced of this.

I am certain of my fact.

One cannot be more certain of any fact.

All the difficulty will be

in the first two or three days;

after which the reformation

will be as natural and easy

as the present irregularity,

Instead of cursing the darkness, light a candle.

How could he know what he couldn’t see

when he played with his watch?

A scientist of the Age of Reason,

he didn’t know a chronobiologist.

His Junto never discussed the studies

because they hadn’t heard of a car.

The good French wine must have blurred

his vision and slowed his heart,

or why else didn’t he see the sharp increase

in heart attacks on the day they turned the clock.

But there’s the catch, they didn’t.

his hubris too large, his temperament

less regulated than his watch.

his letter to the editor of the Paris Journal

doubtless of his own perceptions.

have felt in his gut he was wrong

if he could have flown to France

on a jet and felt the lag in his eyes

for a day, in his head for two,

and all along his digestive tract

for nearly a month. But I think

Old Ben would have been sure

it was simply the food he could see.

He wrote the editor he needn’t be paid

except with honor for his clever insight.

If Ben were still alive, I have no doubt

he’d be honored with a class action lawsuit.

The plaintiffs’ counsel would surely quote

“Ignorance is not innocence but sin.”

Or maybe he’d close with the French:

This is only the first step that costs.

Over thirty women filled the luncheon tables of the Beaumont Women’s Club on Sixth Street when I arrived.  “Would you help us with an extra table?” asked Ruth Jennings, the Program Secretary of the Club.  Getting put to work, I immediately felt like I was at a family event where the men had all escaped to another room.

A few weeks earlier, Mrs. Jennings had written me a beautiful handwritten letter in response to my Inlandia Literary Journeys column, The Lost Art of Letter Writing. She had invited me to join Cati Porter, Executive Director of the Inlandia Institute, to discuss the work of Inlandia and share some of our poems.  Written on gray cotton stationary, Mrs. Jenning’s formally formatted letter described her own remarkable personal letter collection, including letters written by relatives describing scenes of the American Civil War and the funeral parade of President Garfield in 1881.

Although in my childhood my grandmother Margaret Stone was a longstanding member of the Waverly Women’s Club in Pennsylvania, and my mother, a housekeeper, had been paid to wash the dishes for that group’s meetings, I had never been privileged to view the proceedings of any of their meetings.

When the women in Beaumont stood to start their meeting by saying the pledge to the American flag as I brought in the last of the extra chairs they had asked me to retrieve from the hall closet, I paused in the door and placed my hand over my heart, feeling like a kid in school.  I quickly joined Cati Porter at our back table in time to listen to the women recite the Women’s Club Pledge as they held hands.  At first I felt compelled to join the women in committing to virtue and service, but hearing my own lower voice, I fell silent and scanned the room.  The youngest were middle-aged like myself.  The oldest, Blanche B. Fries, sat directly in front of me.  At a hundred years old, she told me she still teaches piano lessons to children.  She has five students.

President Joan Marie Patsky, chairing the meeting from a podium at the front, encouraged members to pass a clear plastic jug and give “Pennies for Pines.”  A thoughtful member told me of the Club’s service project, how they collect money to purchase property and to plant trees.  I followed the example of most of the members and emptied my wallet of some green bills and not copper.  A container for a fifty-fifty raffle soon followed.  One lucky member takes home half the pot, and the Club earns the rest.  They asked Cati to draw the ticket for the day.  The winner shouted when she determined she held the winning ticket.

Cati and I filed to the back of the room to pick up one of the antique clear glass luncheon plates with a corner raised ring to stabilize a cup.  Disappointingly, no matching glass cups were set out for this meeting.  I have never dined with that form of dinnerware.

Stretched over several tables were finger sandwiches, deviled eggs, crudités, sweet breads, and fresh fruit.  Back at the table, I pleasantly startled myself as I ate what I thought was a pitted natural olive, but turned out to be a homemade chocolate.  I enjoyed the sweet treat just before I stood up to speak.

President Patsky introduced Cati and I to the members.  Cati described the mission of the Inlandia Institute to promote literary activity in the Inland Empire region of California through writing workshops, readings, and the publishing of books through Heyday Books and more recently under the Institute’s own imprint.  She announced the inaugural Hillary Gravendyk Poetry Book Prize.    Cati read a poem from her book Seven Floors Up inspired by a sticker that came home with her son one day, “Caution Please Do Not Turn The Head Forcefully.”

Inspired by the fine penmanship in Ruth Jenning’s letter of invitation, I began my portion of the program with “If We Stop Teaching Cursive” and “Reading Time.”

Attempting to highlight the range of Inlandia publications, I read several of my poems from the 2013 Writing from Inlandia:   “On Seeing the Cost of Time Change,” “Riding the Flexible Flyer,” and “A Dammed Life.”  I displayed broadside prints for each of these poems with the block print illustrations I had created.

From Orangelandia:  The Literature of Inland Citrus, I read “Wishing for a Ladder” and “Redlands Sunset.”  From Inlandia: A Literary Journey, the official online literary journal of the Inlandia Institute, I read “Creosote,” and “A Rare Night Air.”

I closed with “Two Eggs,” “My Father’s Amputation on Tuesday,” and “My Top Drawer.”

The members asked Cati and I numerous questions about Inlandia and the topics brought up in my poems.  They also spent several minutes in animated discussion of Timothy Green’s Inlandia Literary Journeys column “Poe and Poetic Discovery.”

More than thirty years after my mother had shooed me out of the kitchen at the Waverly Community House and told me a Women’s Club meeting was no place for a boy, I decided it was a great place for a man to visit.

If We Stop Teaching Cursive

If we stop teaching cursive,
how will my children read
the letters I wrote their mother
before she was my wife?

If we stop teaching cursive,
how will their thoughts
flow across the paper
free from the pause of print?

If we stop teaching cursive,
how will they feel the pleasure
of the spiritual loops
that always end up?

If we stop teaching cursive,
their words will not waltz.
They will only march
as straight-backed, broken soldiers.

Friday afternoon I began making a new block to illustrate my poem “If We Stop Teaching Cursive.” I transferred the design to the block, and . . .

began carving the inverted design. I hope to get it finished by next week. I want to make note cards with the print on the outside and the poem on the inside with room to write.

Late last year I made three limited edition broadside prints with my own block prints. I selected three poems that were included in the 2013 Writing from Inlandia anthology. The print above illustrates “A Dammed Life.” 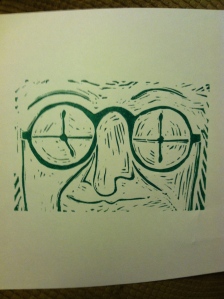 “On Seeing the Cost of Time Change” 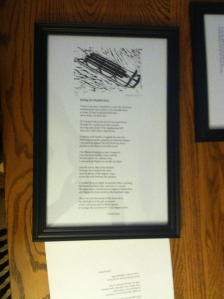