Ontario Museum of History and Art

Shortly after two this afternoon, her feet planted firmly on the floor of the Ontario Museum of History and Art, Nikia Chaney did more than walk the talk, she took flight and brought a room full of writers with her. 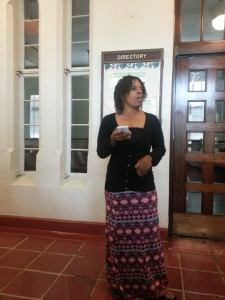 Chaney captivated the four tables full of workshop participants as she opened with the recitation of one of her own poems. In her rich alto voice, she pondered the removal of her wings. Far from fanciful, her words tapped into deep human fears and desires.

Waving off applause and finger snaps, saying we needed to move quickly with so many participants, Chaney quickly sought volunteers to read each of the three poems she had included on a handout: Ed Roberson’s “Here,” Langston Hughes’ “Dreams,” and Maya Angelou’s “Touched by an Angel.” She asked the participants to question: What do you fear? Why do you hope? What does it mean to fly?

Chaney gave ten minutes to write on each question. She encouraged the participants to write prose or poetry, whichever they would like. She had planned for the group to break for inspiration from the “Black Wings:American Dreams of Flight” exhibit on display at the museum through March 8th, but the number of participants prohibited it.

When thirty minutes had passed, the sharing began. Chaney encouraged initial praise and then constructive criticism. The group needed little prodding. Almost entirely women, they were highly affirming. Each participant had the opportunity to read. 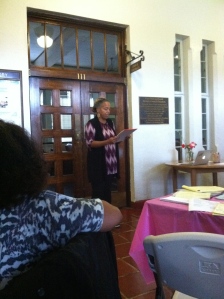 In two hours, the group metaphorically took flight on more than twenty journeys from fear to hope and left with their own new creations.